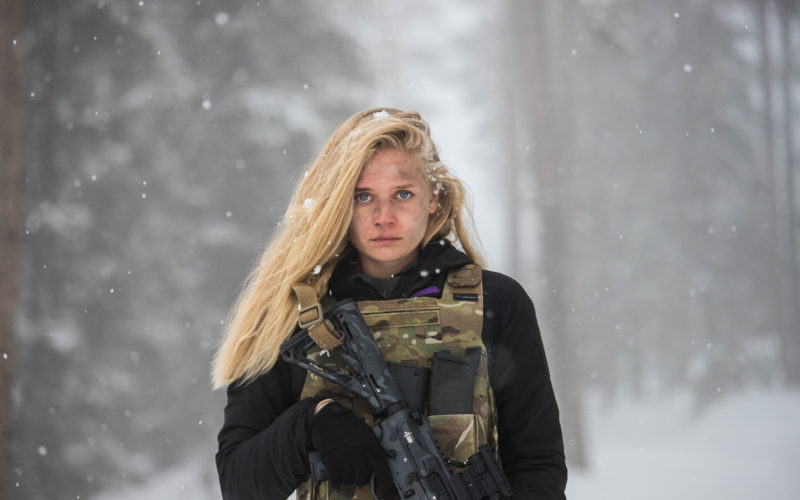 “For 22 years, I’ve played dress up for a living. As an actress I’ve been kidnapped, gone blind, nearly eaten by lions, and murdered on more than one occasion. I tormented Lizzie McGuire’s little brother on the Disney channel, was a dolphin trainer, the first female soccer player on an all-boys team, and Harrison Ford once rescued me during an intense home invasion.”

“That’s exciting and all, but in January I decided to raise my right hand and swear into the United States Army.” – Carly Schroeder

Earlier this year, actress Carly Schroeder announced her bold decision to swear into the United States Army with one goal in mind: to fight human trafficking and other global injustice. In addition, O.U.R. is honored to welcome her as our newest Ambassador and Abolitionist!

Carly was introduced into publicity and acting at a very early age. She did print modeling, television commercials, and finally various TV series and movies starting when she was just 6 years old. She is fortunate to have a loving mother who did all she could to shelter Carly from some of the dangers and pitfalls that could come with being a child actor and having publicity and fame in Hollywood at such an early age.

“Despite the industry’s scandalous nature, I grew up with a rose-colored view of the world around me,” Carly told us. As she matured and learned more about the world’s problems, a passion for change ignited in her. When Carly began college, she quickly switched from a theatre major to a criminal justice focus. She said,

“I still remember sitting in a policing course and learning that human trafficking was a domestic problem.”

She wasn’t the only one in her class who was surprised by this fact. Carly said that the rest of her class seemed equally stunned that human trafficking wasn’t solely like the plot of the film “Taken.”

Looking back, Carly sees how sheltered she was as a “Disney Kid.” She has learned that, when it comes to child exploitation and trafficking in the U.S. and around the world, it is precisely this demographic that is at high risk. She realizes that sometimes child actors are the ones being targeted or could be at risk for being targeted.

Carly consumes as many documentaries, books, and articles about human trafficking that she can find. She was shocked that it is such a major issue, and that college was the first time she had ever heard of it. She shares the belief of O.U.R founder Tim Ballard that the magnitude of human trafficking makes it deserving of a place on the front pages of the news every day.

This realization has pushed Carly to stand up and use her voice and platform to discuss this issue. She first discovered O.U.R. on social media, which sparked more digging and research into the issue of human trafficking. She found herself sending different posts to friends and family, educating them on what she was learning. “I knew immediately that I wanted to be a part of O.U.R. because they provide tangible results. O.U.R. is making a positive impact both foreign and domestically,” she said. In her experience, simply educating a friend or family member is enough to inspire change and make a difference.

“The more people we educate and encourage to take action, the more successfully we can, as a community, country and global coalition work to trafficking, because whether we acknowledge it or not, it affects us all.”

We are excited for Carly as she heads off in the coming days to basic training and Officer Candidate School to follow. We hope for her safety and success. Her father was a Green Beret and her brother is a Marine, and they have been great supporters of Carly along the way. With a strong tradition of service in her family, Carly is honored to join her father and brother in the service of our country.

We are incredibly grateful for Carly’s desire to use her platform for good. She could be doing anything with her fame and notoriety, but she chooses to give a voice to the most vulnerable.

“Posting pictures with whimsical captions is great, but I choose to use my platform to educate and speak up about injustices,” Carly said. “I’m a multifaceted individual with varying interests, but helping and protecting children has always been my priority…Anyone CAN make a difference.”