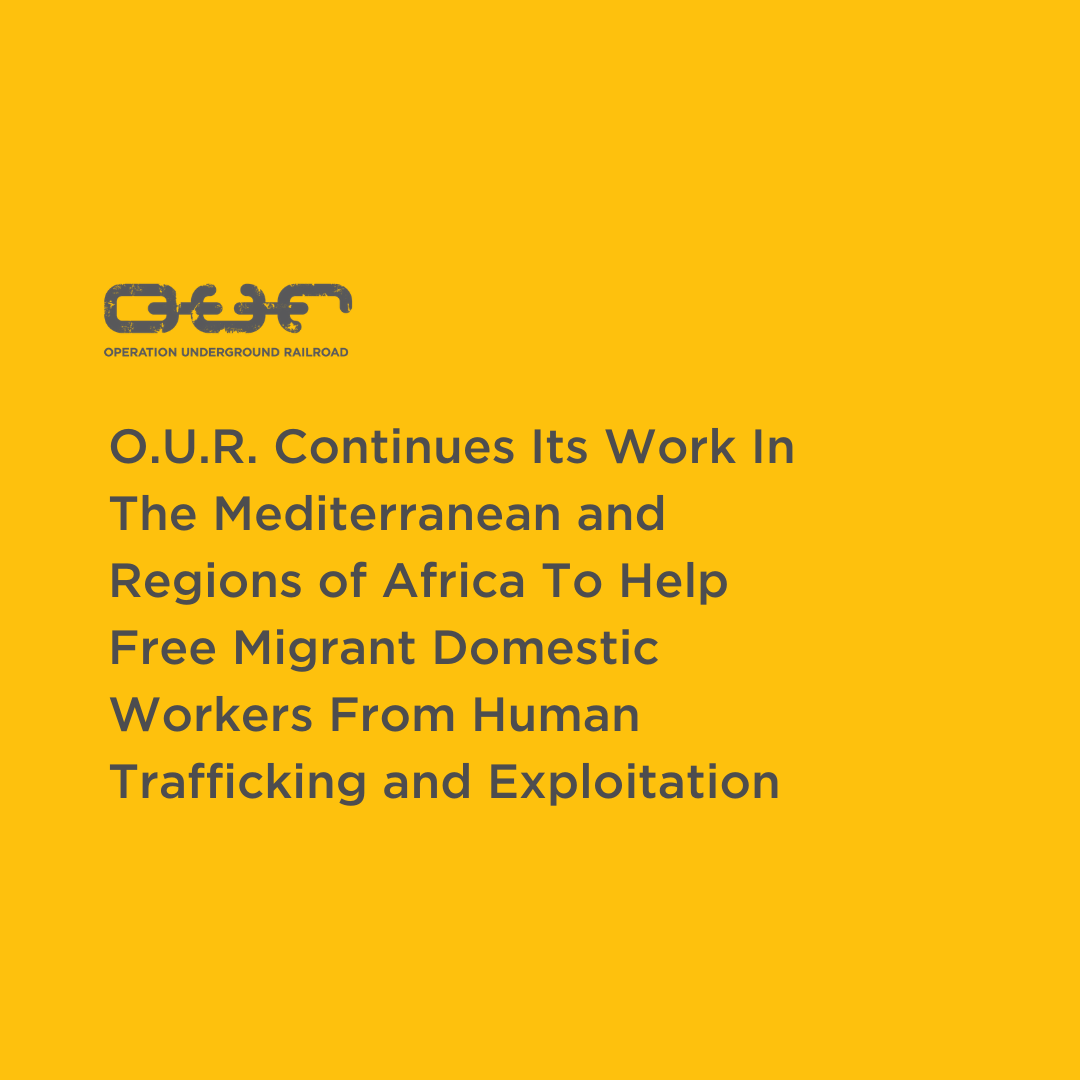 O.U.R. has continued its efforts in Africa and the Mediterranean to rescue migrant domestic workers who have been exploited and trafficked on the job. Migrant domestic workers travel from the regions of Africa to the Mediterranean in search of employment, and unfortunately, many become exploited and trafficked by false employment agencies. Forced labor is one of the predominant forms of human trafficking in Africa. According to the United Nations Office on Drugs and Crime “2020 Global Report on Trafficking in Persons,” close to 80% of victims in the West African region were trafficked for purposes of forced labor; forced labor remains the main form of exploitation in the West African regions, as well as in Southern Africa and East Africa (UNODC.org ). O.U.R. Aftercare and its regional partners have continued their work in rescuing the survivors of human trafficking who have traveled to the Mediterranean for work and return them safely to their home countries in Africa.

Amongst the many forms of human trafficking, involuntary domestic servitude is a predominant issue that poses a variety of vulnerabilities for domestic workers, especially migrant domestic workers.

According to the U.S. Department of State, involuntary domestic servitude is a crime in which victims are unable to leave their place of employment and are often stripped of their basic rights and protections. Oftentimes this can be seen as forms of physical, mental, and psychological abuse, especially in the case of female victims. The domestic workers’ vulnerability is highly increased by being employed in a private home, oftentimes isolated from authorities and outside resources (State.gov). Involuntary domestic servitude is a form of human trafficking and one that poses distinct vulnerabilities for victims, especially for migrant workers.

In particular, migrant domestic workers are often subjected to extreme vulnerabilities and violations of their basic human and labor rights. According to the International Labor Organization, “Their vulnerabilities emerge in the form of the absence of adapted assistance and protection mechanisms, social and cultural isolation due to language and cultural differences, lack of clear terms and conditions of their employment, absence of labor law coverage and/or enforcement in the country of destination, and restrictions on freedom of movement and association” (ILO.org). While it’s imperative to also acknowledge that there are migrant workers who do receive compensation and who are not exploited or trafficked on the job, there are many who are. In the case of this subsidiary of migrant workers, many leave their home country in search of a better standard of living and are exploited, stripped of their rights, and forced into human trafficking.

How female migrant workers are trafficked and exploited on the job

In many cases, women will depart their country of residence, leaving their children and family, in search of work. Upon arriving at the place of employment, it becomes apparent that these establishments are false employment agencies, and the “employers” take the womens’ passports and documentation and confiscate their phones.

After these women are stripped of all means of communication and documentation, these traffickers will exploit the women making them work excruciating hours without compensation. In many cases, the migrant domestic workers do not receive basic living needs such as shelter, food, and supplies.

These employers not only exploit the workers at their place of employment, but many traffick their workers to other locations and agencies. The traffickers will emotionally and physically manipulate and exploit the victims, forcing them to comply and travel to other countries or locations. Many of these women are told little information about where they will be going, to whom they will be working for, and for how long.

Fortunately, some women are able to escape through any means possible, however, this poses an even greater vulnerability, as they escape to the streets without any documentation or financial means to sustain themselves. Since it is against the law in many countries to not have proper documentation, these women are discovered by local authorities, arrested, and put into jail. Once the employers are notified, they typically lie and tell the authorities that the woman has committed a crime and escaped their employment contracts. This form of manipulation keeps the migrant domestic workers inside of jail without legal representation, financial stability, or documentation to identify themselves. Local laws have yet to be made to fully protect migrant domestic workers and provide refuge or a way out. Oftentimes, the victims are told to go back to their place of employment, many of whom are exploited or trafficked again. This vicious cycle of exploitation and manipulation leaves victims stranded in jail cells without legal support or a way out.

O.U.R. Aftercare and its partners have been working diligently in regions of Africa to provide support to migrant domestic workers and help break the chain of trafficking they are forced into. In many African regions, it is common for women to leave their homes and travel to the Mediterranean for employment opportunities. Which, they soon discover, are completely falsified once they arrive and are then exploited and trafficked.

With the help of full-time O.U.R. in-country aftercare contractors and partners, we are able to provide support in many different ways. Similar to how we provide aftercare in all countries, we meet survivors’ needs on an individual basis. O.U.R. contractors and partners consistently visit prisons to help identify these survivors in the situation described above. Many times, these jails are overcrowded and lacking the resources and supplies to support the women’s basic needs. O.U.R. promptly provides additional food, hygiene items, and clean water to the women as our team and partners begin to communicate with the local law enforcement.

O.U.R. Aftercare facilitates and negotiates with local authorities to gather any necessary paperwork and retrieve any stolen documentation from the survivor’s previous employer. Once negotiations have been finalized, and the survivor has been approved to return home, O.U.R. gladly purchases the flight tickets and coordinates escorts to and from the airport. Once the survivor has arrived in her home country, an O.U.R. partner will wait patiently for her arrival. Together they will assess whether the survivor has a home to be safely escorted to, or whether a safe house is needed.

The initial support that O.U.R. offers to the survivor is only the beginning. Aftercare partners continue to provide any support necessary once the survivors return safely home. Which includes, but is not limited to, frequent check-ins, follow-up care, mental health therapy, vocational training, and more.

Rescuing these survivors is merely the beginning of a journey towards freedom. It is O.U.R.’s deepest desire and goal to ensure that the survivors are never exploited or trafficked again and that they receive the necessary means and support, to integrate safely and securely back into their life at home. Aftercare staff is eager to support and aid in relief for the survivors upon their return home to their country. Although O.U.R.’s Aftercare is a huge proponent in rescuing the survivors, it is the survivors’ courage and strength that light the pathway towards freedom. The courageous heart in every single survivor is where the true hero lies. O.U.R. is immensely grateful to be part of the restoration of survivors in the Mediterranean and African regions and will continue its efforts until these human rights violations, exploitation, and trafficking no longer exist.