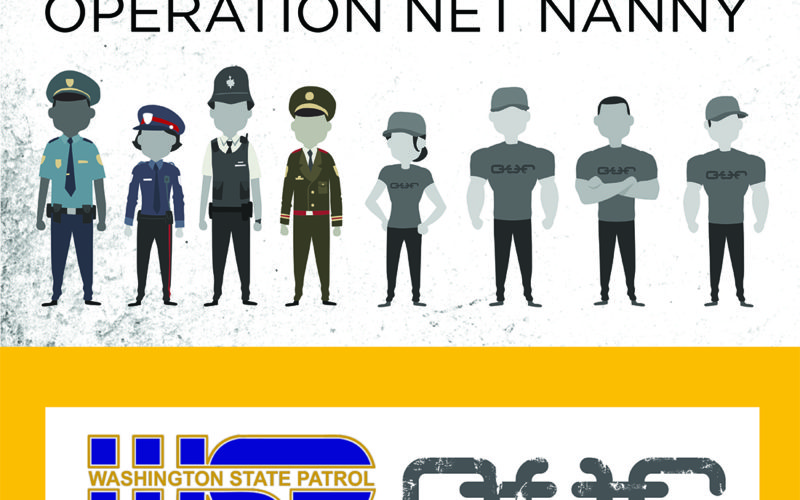 Thurston County – 22 dangerous sexual predators who targeted children in Thurston County were removed from the streets, thanks to a multi-day operation run by the Washington State Patrol (WSP) and several partner agencies.

Dubbed “Operation Net Nanny,” this is the 15th operation spearheaded by the WSP’s Missing and Exploited Children Task Force (MECTF), an Internet Crimes Against Children affiliate. Since the original operation in August 2015, MECTF has netted a total of 246 arrests and rescued more than 30 children across the state.

MECTF’s primary mission is to proactively target those persons involved in child abuse and child exploitation via the internet. “While the internet is a powerful tool for our nation, criminals using it to target our communities’ necessitates a need for this type of proactive investigations by our law enforcement troopers and partners in order to combat these horrible crimes,” says WSP Chief John R. Batiste.

“This operation is aimed at protecting our vulnerable children and making communities safer,” adds Chief Batiste.

From February 15, 2019 to February 20, 2019, undercover law enforcement officers used various websites on the internet and phone applications to communicate with people interested in having sex with children. The operation generated hundreds of responses. The would-be perpetrators who were arrested over the five day operation traveled to meet with the undercover detectives posing as underage girls and boys with the intent to engage in sexual activity with children as young as six-years-old.

The names of the individuals arrested during the operation are:

Anyone with information related to the suspects listed, or information leading to the identity of victims potentially involved in these cases please contact MECTF at mectf@wsp.wa.gov.

The collaborative effort involving more than 70 dedicated law enforcement officers, agents, and staff led to the success of this operation.

The funding for this operation was made possible due in part by support from the public as well as a generous donation from Operation Underground Railroad (O.U.R.). O.U.R. is a non-profit 501(c)(3) who shares the mission of law enforcement agencies to save children and see that child predators are arrested and prosecuted.

O.U.R. is privileged and honored to partner with our nation’s law enforcement heroes in this important cause to combat the sexual exploitation of children in our nation’s communities.

*UPDATE: The charges to Mr. Quenton Parker were dismissed.